One of the biggest events of the year for the Movie Trivia Schmoedown is the Free4All, and on Saturday March 23rd, fans in Los Angeles were treated to the show live, for the first time, at the Globe Theater.

And what an event it was.

To try to encapsulate every moment of the Free4All would take far too much time and energy for anyone to read, let alone write, because from the very first moment to the very last, the energy went all the way up to eleven and never once came back down. A crazy light show, energetic hosts and competitors, shocking eliminations, and surprise appearances peppered the evening as the Free4All celebrated its third year.

But even great events are not without their obstacles. Fans from out-of-town were treated to a live feed of the event, available for purchase through the website or by becoming a $10 or higher patron on Patreon, but their view was limited. Prior to the start of the show, the live switcher at the theater went offline, and the streaming viewers were limited to a single wide shot of the event. Now, there were still cameras aplenty recording the event, promising that the fully produced version of the show, which will be available to the public on Friday March 29th. But to make matters worse, the feed was then hit with a copyright strike at the 1 hour mark due to the lengthy entrance from Greg Alba, causing his intro song to play for longer than anticipated. The video was pulled down by the Schmoedown, and later re-uploaded with Alba’s entrance edited out. Not to disappoint fans who had paid good money to see the event streamed, Schmoedown Commissioner Kristian Harloff promised that the newly re-uploaded feed would be available until the end of the day Monday March 25th.

And yet, this year’s Free4All still took the internet by storm. Here are a few of the big highlights from the match:

William “The Beast” Bibbiani, Brendan “The Kid” Mayer, and Rachel “The Crusher” Cushing were both part of the initial five competitors to start the evening off. And they stayed there for quite a while. Dominating the field time and time again, both of these powerhouse players dove deep into their brains to pull out movie knowledge left and right, outlasting their competition until finally, in round 8 of the event, Rachel had to bid the stage farewell along with Whitney Siebold and Greg Alba. Fans groaned and frowned as the reigning InnerGeekdom & Teams champion walked off the stage, both belts slung over her shoulders, but as she did so, it was with an air of triumph and satisfaction for having lasted so long in the first chunk of the event. 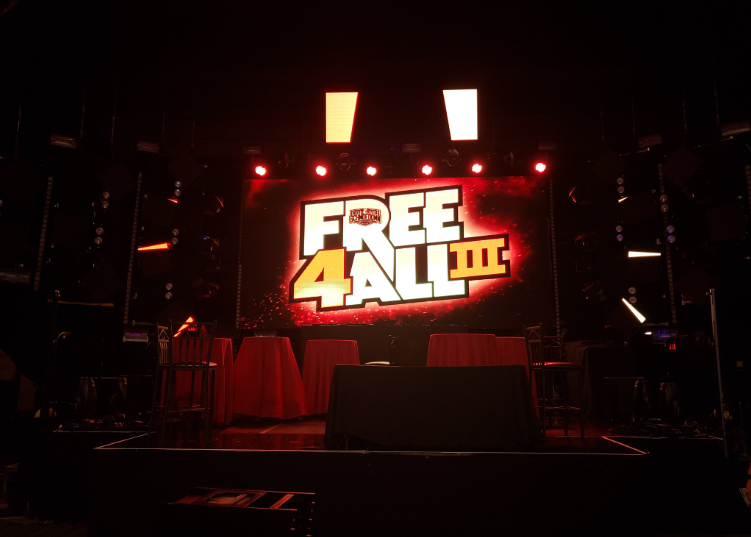 Brendan “The Kid” Mayer was a sight to behold. A recent addition to the Schmoedown, having just had his debut this season, Mayer showed up to the event ready to play. Hanging tight with the likes of Bibbiani and Cushing, managing to outlast the two-belted champion, and going on to last all the way until the twelfth round, where he was eliminated by Bibbiani along with Haleigh Foutch, Mike Kalinowski, and Paul Preston, a newcomer to the Schmoedown. Mayer made a big name for himself in the Free4All, with it being only his second match in the Schmoedown, having lost his debut to Paul Oyama less than a month ago. “The Kid” is a competitor to keep your eyes one from here, folks.

As for William “The Beast” Bibbiani, what can you say about this titan of the Schmoedown that hasn’t already been said a million times? He was the MVP of the previous Free4All, is a former title holder, and has been one of fiercest competitors the Schmoedown has ever seen. He was the first competitor to hit the stage at this year’s Free4All, he knocked out all 4 of his opponents in Round 12, and…

After Bibbiani cleared the stage, the show took a brief intermission. Upon returning, the show got a lot more intense as the remaining tables began to fill. Lead to the stage by his feisty manager Roxy Striar, fresh of his loss to John Rocha, Andreyko came out in good spirits, hugging and shaking hands with everyone on stage (including Rocha) ready to have fun, make jokes, and rock the house. He came on in Round 13, sharing the stage with John Rocha, William Bibbiani, Robert Montano, and his “The Odd Couple” teammate Jeff Sneider.

As the founder of the “Outlaw Nation” Facebook group, I’d be remiss if I didn’t spend some time gushing about my favorite competitor. Rocha came onto the stage in Round 13, just following Bibbiani’s triumphant clearing of the field, hungry for victory, ready to be the one to take down “The Beast” once and for all at the Free4All. He sat at his table and, in true Outlaw fashion, adorned his legendary blindfold. Sadly, John Rocha would be eliminated in the 15th round, but his energy and passion were constant throughout his entire run in the match. 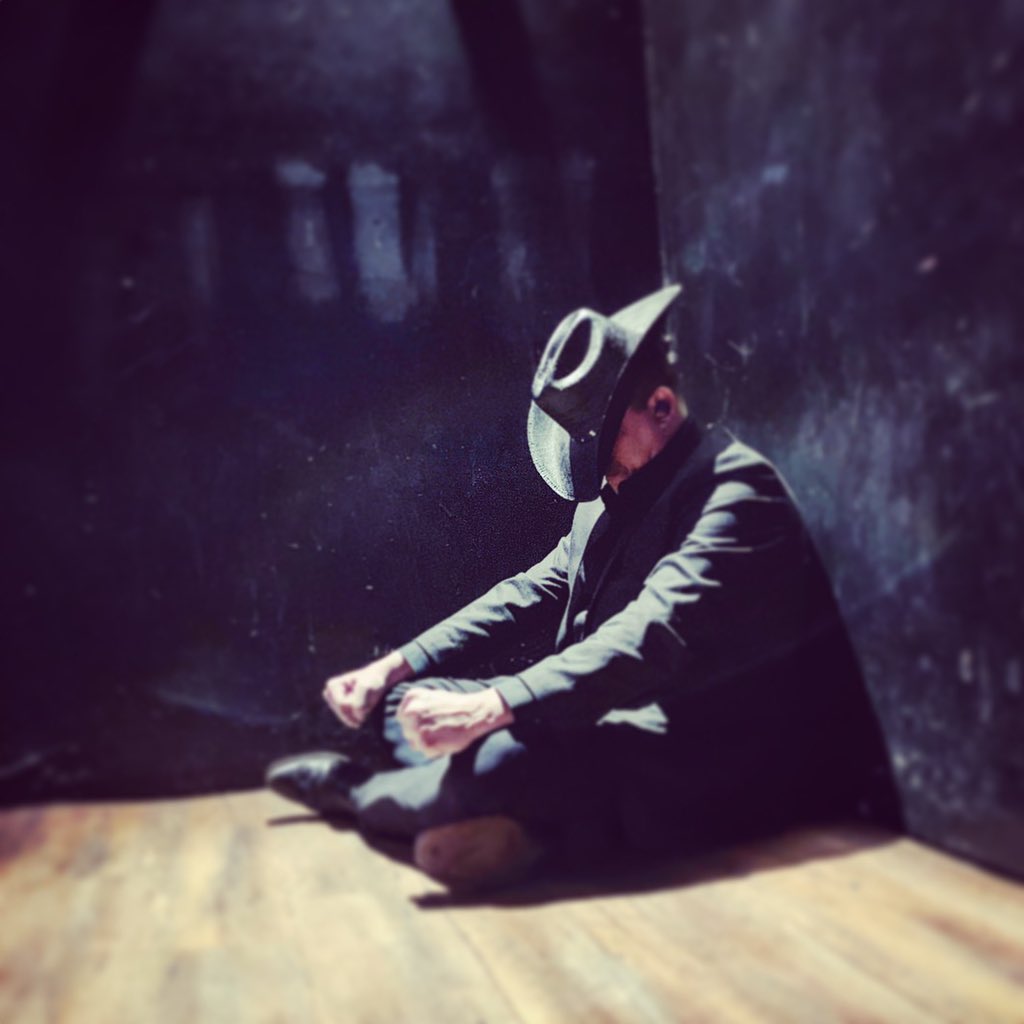 Jeff Sneider entered the room, dressed as Eli Roth’s character from Inglorious Basterds aka “The Bear Jew” and Robert Montano came in to a Police Academy themed entrance, dressed as a police officer. And though Montano bid the stage farewell at the end of the round, the amount of pure talent that sat at those tabled for Round 13 was something to behold. 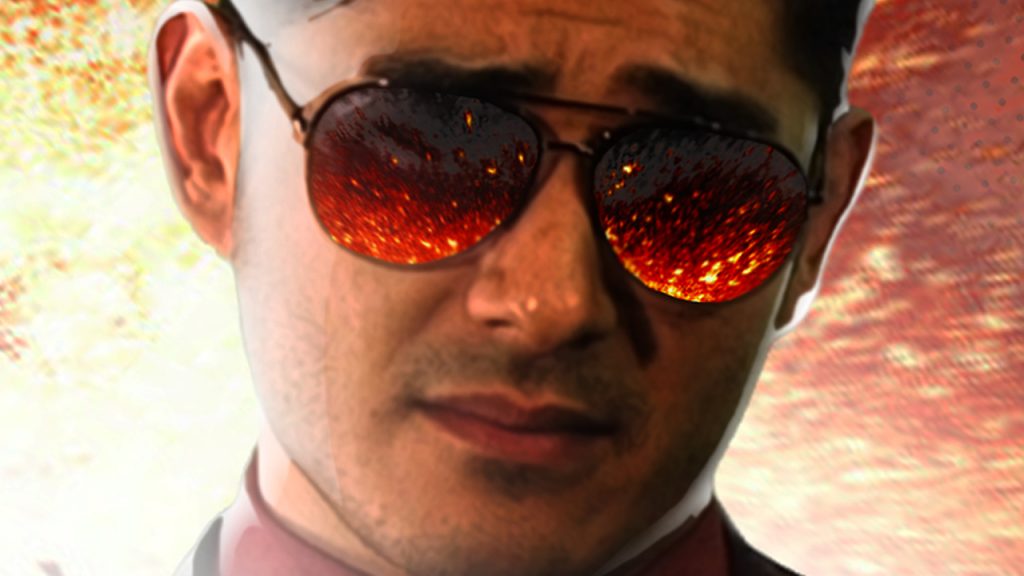 Ghai is making it known that he intends to go down in Schmoedown history as one of the biggest heels of all time. He came onto the stage in Round 14, ego heavy, avoiding handshakes, talking smack, interrupting questions, and almost getting DQ’d for attempted cheating off of Bibbiani’s board. He did a lot of screaming and yelling, but only managed to answer two questions correctly in the entire round, and was swiftly dispatched. To quote Mark Ellis: “It is so impressive to see someone talk that much and get so few questions right.” 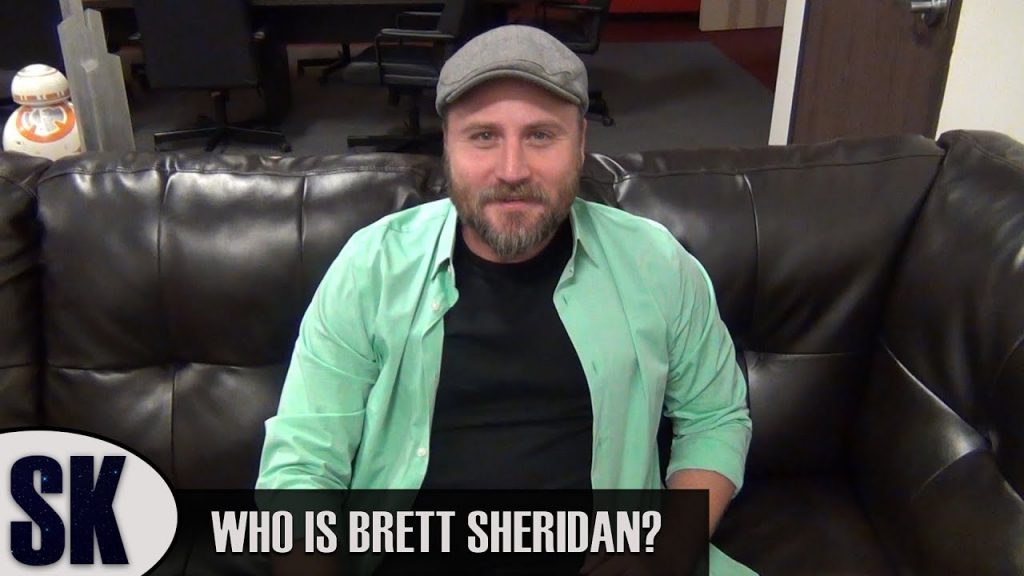 Fans of the Schmoes Know Show and Collider Live are all too familiar with Brett Sheridan. He’s a comedic powerhouse and is famous for not seeing any movies. Like…ever. And everyone, including Harloff, wondered when he’d give in and make a run at the Schmoedown. Well, when it came time to announce the 39th competitor, the familiar Collider Live theme song started playing…who would be coming out? Roxy? Cody? Alex? No! Brett motherf***ing Sheridan!!! Did he do well? God, no, he didn’t get a single question correct, middle seat or not. But nobody cared. We were just happy to see Brett on stage, having fun, cracking jokes, being Brett. We are all Brett, and Brett is all of us. 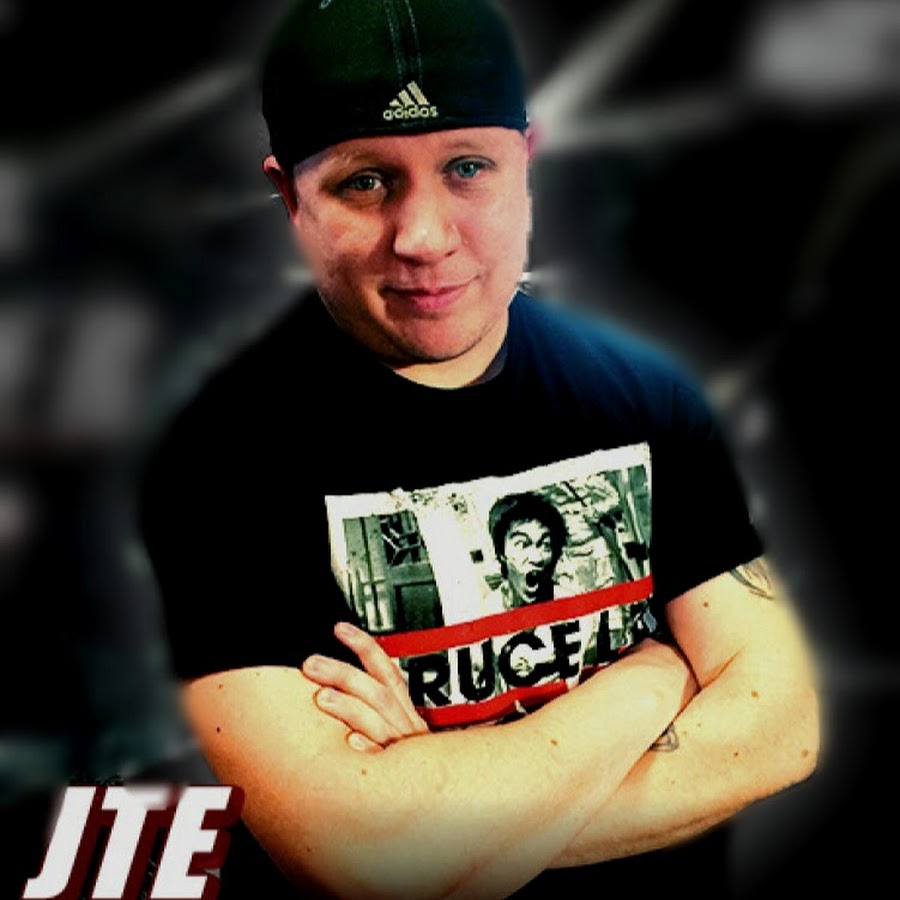 He’s finally back! The former team champ is back! His theme song hit and the crowd lost their minds! He came in at Round 20, on the stage with Jeff Sneider, Dan Murrell, Tom Dagnino, and (still) William Bibbiani. He talked smack at his former teammate Jeff Sneider and came to throw down like not a day had been missed in his career. He made it all the way to the final three, along with Dan Murrell and STILL William Bibbiani, and sent that round into sudden death, resulting in…

JTE. Dan Murrell. William Bibbiani. All three of them Schmoedown legends. The final round went into triple sudden death. Questions from Fantasy/Sci-Fi, Stanley Kubrick, and a plethora of others. It was tense, nail-biting, and stressful. The lead went back and forth. Who would win? Who would be eliminated? How much more could Bibbiani possibly take?

It all came down to the last question, and only one competitor was left standing.

It was a knock down, skin-of-the-teeth, drag out battle on the stage of the Globe Theater. And Dan Murrell, his head held high to thunderous applause, emerged victorious. And to the surprise of f***ing nobody, the coveted MVP award was given to William “The Beast” Bibbiani for his unprecedented streak in the Free4All, coming in as the first competitor, making it all the way to the final round. Nobody thought that his run in the previous Free4All could be topped, but if anyone could best the Beast, it’s the Beast himself. 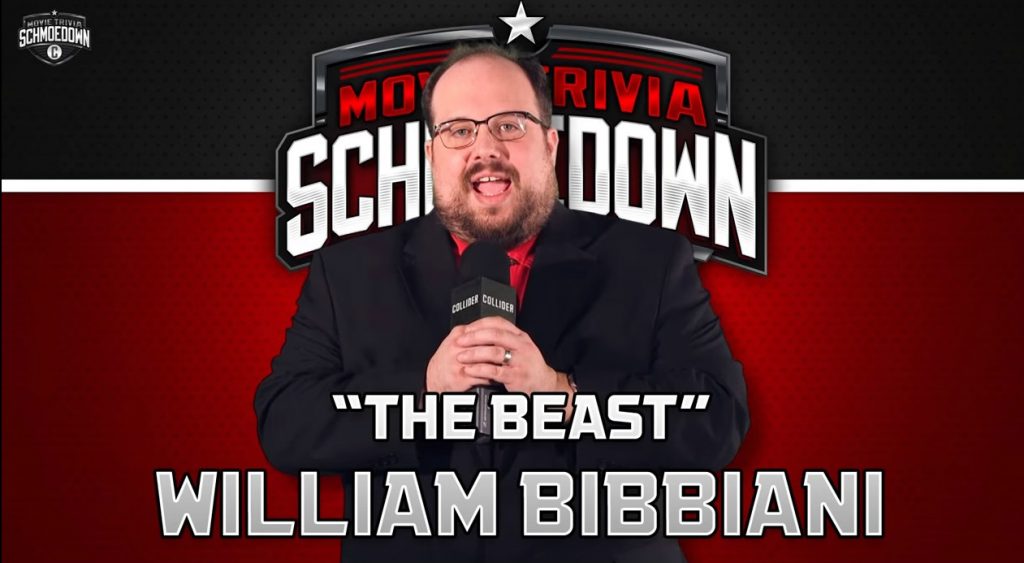 But both of these results leave some pretty big questions:

Murrell, as the winner, is now guaranteed a shot at a title in the Schmoedown. But he’s already the current champion of the singles league. Does he use it to give himself and teammate John Rocha a shot at the team league title? And since Bibbiani is the MVP, he’s granted a shot at the #1 contender position, but he’s already competing in a triple threat match against Rocha and Ethan Erwin for a #1 contender position. What on earth is to be done with these two prizes for these two competitors? 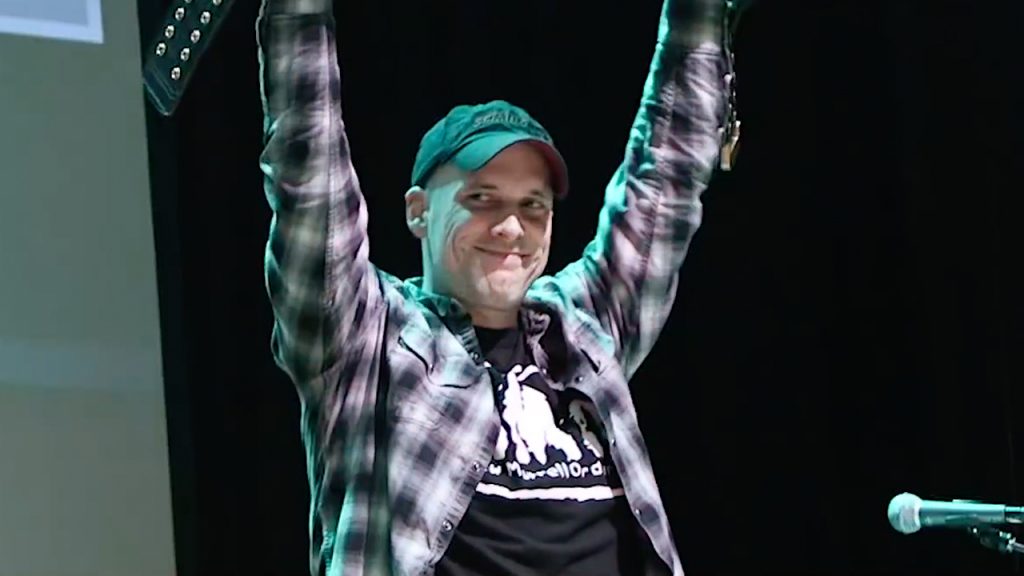 One thing is for sure, the next few months of the Schmoedown are going to be quite telling and action-packed. And as I, myself, count down to the Chicago live event in April, knowing what I know now…

…how much more incredible can this season get?