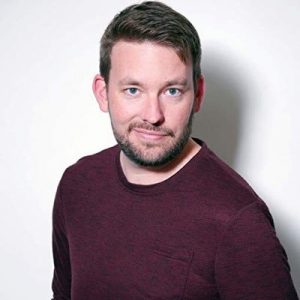 Jason Inman is a Kansas farm boy who read too many comics and science fiction novels as a child. Luckily, he was able to turn that into a career. His newest non-fiction book, Super Soldiers, is about the secret connection between comic book characters and soldiers in the military.

Jason is also the co-creator and co-writer of Science! for Bedside Press and Jupiter Jet for Action Lab Entertainment. He also co-wrote a piece for the DC/IDW Love is Love Anthology. Jason was the host of DC All Access, DC Comics’ official web series for over three years. Besides having written for several comic and entertainment websites, Jason has produced and written for web shows including Good Mythical Morning and Screen Junkies.

Prior to becoming a writer, Jason served in the US Army and Kansas Army National Guard deploying as part of Operation Iraqi Freedom.