Marvel’s team up series in the vein of The Avengers has hit Netflix. After getting their own individual seasons, heroes Daredevil, Luke Cage, Jessica Jones and Iron Fist are forced together in order to combat an ever-present threat in the criminal organization, The Hand.

After all of the hype and buildup from the solo seasons for each of these characters, we finally got to see this new team come together. During the 8 episode season, the team had to overcome their own personal issues to find a way to defeat The Hand and their attempt at destroying New York City. While there certainly were a lot of fun aspects to this series, I feel like it missed the mark. 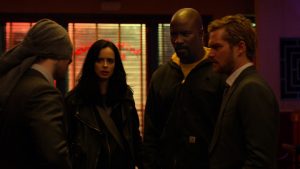 I loved both seasons of Daredevil, really liked most of Luke Cage season 1 and thought season 1 of both Jessica Jones and Iron Fist were just ok, but I really held high hopes to see them together on-screen for The Defenders. The gritty and grounded nature of the way Netflix and Marvel have done these series has been a nice change up from the rest of the MCU. However, I feel like The Defenders spent way too much time deviating from the crux of the plot.

As we are being re-introduced to each of these characters, they are all focused on their own lives, which makes sense. Matt has “retired” as Daredevil, focusing on his career as a lawyer without Foggy’s partnership. Though they are still chummy, the awkwardness with Karen was off-putting. Karen really had nothing to do during this season and pretty much wasted screen time. 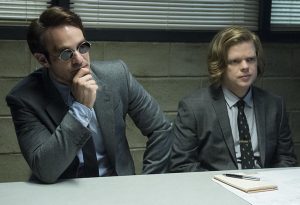 Luke, after being released from prison, is trying to help a family that has seen a lot of despair, as the children have either been killed or turned to crime. Jessica, still hitting the bottle heavily, is tasked with tracking the husband of a woman who has vanished. Danny and Colleen are still in pursuit of The Hand, as they have been traveling the world in their quest to take them down. 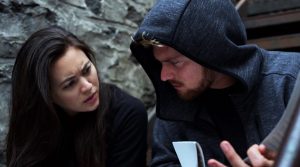 Aside from the main four characters we also see a ton of familiar faces like Stick, Claire, Misty, Trish, Malcolm, Elektra, Madame Gao, Bakuto, and newcomer Alexandra. Each of these characters have popped up in the other series, either aiding or causing trouble for our heroes. Seeing them all share screen time was pretty cool for the most part.

I first want to highlight some of the aspects that I enjoyed from this series. Getting to explore more of the mythology of The Hand was really interesting. We’ve gotten a lot of information on them with both seasons of Daredevil and season 1 of Iron Fist, but the way they became the major through line for The Defenders was really neat. Even though Luke or Jessica had no prior dealings with them, their own plots were intertwined, forcing the heroes to ban together to stop the threat. The series also did a good job in trying to rectify Iron Fist, making Danny, his power and K’un Lun a huge part of the plot.

The chemistry of the team was pretty humorous in a strange way. The in-fighting and general distaste for working together made their eventual partnership more genuine. I especially liked Luke’s and Danny’s relationship, especially when Danny first told Luke about his power. Seeing Luke’s reaction was very funny, as most of the other characters reacted pretty much the same way. 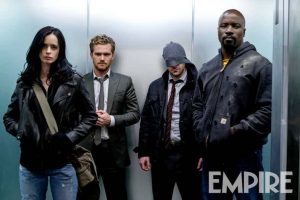 I also enjoyed how the members of The Hand were constantly at odds with each other. Madame Gao, Alexandra, Bakuto, Murakami and Sowande are seen arguing a lot and it was revealed that at different points throughout history they’ve attempted to assassinate each other. This turmoil made their alliance more believable. Having such big egos together won’t always result in success. Their relationship was a mirror of their adversaries and an aspect that I certainly picked up on.

Despite the things I really enjoyed about The Defenders, there were also a lot fo things I disliked. I previously mentioned Karen’s unnecessary role, but I also disliked Misty’s. She was all over the place in terms of her motivations. One minute she’s trying to help Luke and letting him get away with whatever he wants but then she’s actively trying to stop him. She flip-flops so much during these episodes that I just couldn’t appreciate her help in the finale, even when she got her arm cut off. 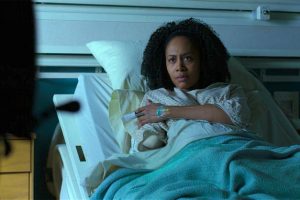 Another character that was a mess was Elektra. I really loved Elodie Young’s portrayal of the assassin in season 2 of Daredevil and was excited to see her again in The Defenders. However, her character made no sense. After being resurrected as the Black Sky and her memories erased, Elektra went from stone cold killer to confused former lover back to stone cold kill and eventually new leader of The Hand. I initially bought into her starting to reclaim her memories, but after she killed Alexandra, things started to unravel. Why, after discovering who she truly was, did she continue to try to fulfill The Hand’s mission? Maybe she was angry or maybe it was poor writing, but her plot got very convoluted for me. And you don’t bring in Sigourney Weaver on a show like this and kill her off 2 episodes before it ends. 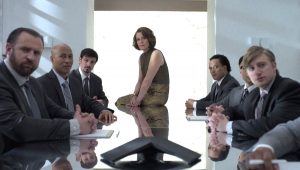 During individual seasons for these characters we’ve been treated to some awesome fight scenes. The mix of martial arts and straight up brawling has been a lot of fun to watch, but I feel like The Defenders was lacking in great action scenes. Don’t get me wrong, there were some great fight scenes, but none of them really impacted me the way they did in other seasons. I feel like there was a missed opportunity for these characters to have some cool tag team-style fights where they aid each other the way Thor & Captain America have or even something like Wolverine & Colossus.

Perhaps my single most disappointing thing from this season was the absence of The Punisher. I really held out hope that he’d at least make a short cameo at some point, but it apparently wasn’t in the cards. Jon Bernthal is getting his own solo season coming soon, so maybe his filming schedule didn’t coincide with The Defenders, but how cool would it have been to see him pop up and start blowing people away? 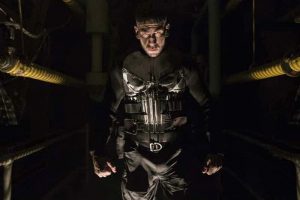 I feel like my positives and negatives are pretty even and even now I’m still having trouble in thinking about how much I liked this season. I think I wanted to like it more than I actually did. I do understand the challenge in taking four separate characters and putting them together in a way that makes sense, but again, I just feel like it missed the mark.

Now that we’ve gotten this team up, what did you think about it? What parts did you like/dislike? How would you rank each of the Marvel Netflix series? And finally, what other Marvel characters do you think would be ripe for their own season?