Game of Thrones marches on with the second episode of its final season.  The stage is set for a truly epic battle with nearly every character getting a moment to shine on their own and with company as the battle against the White Walkers looms ahead.

Nearly the entire episode is framed within one night at Winterfell.  But this is not just any night, it’s the night before the White Walkers attack.  The looming battle hangs over this entire episode, filling our characters with foreboding dread over their fates.  This brings several of our characters together, many likely for the final time. The dialogue in this episode is a significant step up from recent episodes, with all the characters feeling natural and within themselves.  Gone are the simple dick jokes and one liners, and instead we get characters genuinely exploring themselves and their relationships at the face of death. 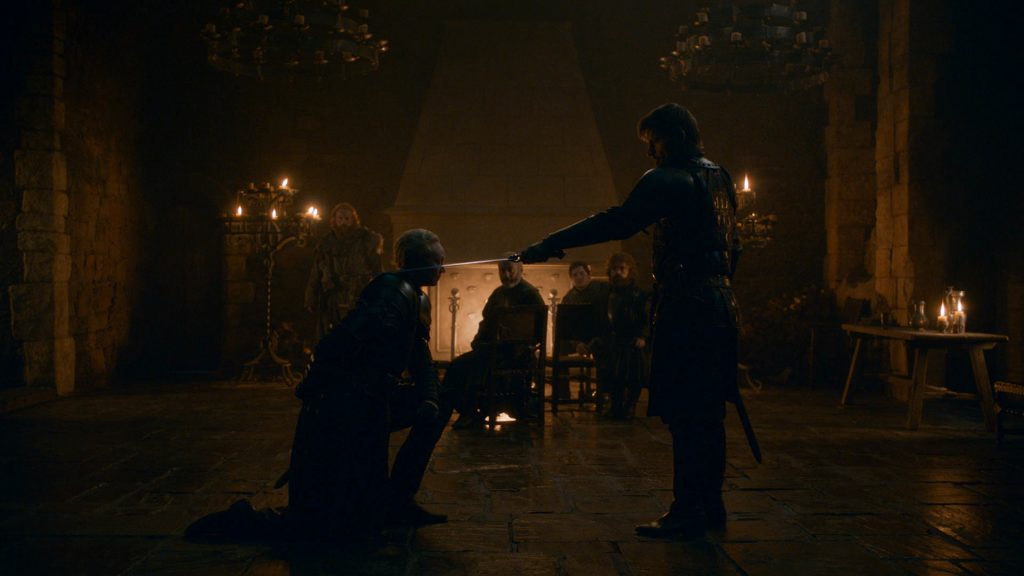 The key sequence of the episode is the fireside chat of several major characters, including Jaime, Tyrion, Brienne, Davos, Tormund and Podrick.  This scene is a heartfelt, heartbreaking, and gorgeous testament to the series as a whole and how far we – and these characters – have come in the last near-decade. It all leads to a powerful moment in the knighting of Brienne by Jaime, a man who once mocked and attacked her in captivity. The slight cheese of this moment is earned and left me with tears over how far the characters have come together.   After spending seasons with this cast of characters in various points and places around the world, we given a moment for them all to sit together. Many of these characters were once enemies, fighting on various sides in Robert’s Rebellion, The War of the Five Kings, and later in Dany’s Rebellion. Now, they fight for the victory of the only side that matters: the side of the living. And many of them will not be living much longer.

This episode directly takes up several criticisms that have been lobbed at some of the characters in this series, especially recently.  Dany has been criticized for her no-nonsense policy of characters bending to her will, regardless of anything else going on around them.  In this episode, she is called out for her leadership by the man she trusts the most, Jorah Mormont, who tells her she needs to trust Tyrion and talk like a human being to Sansa Stark.

Tyrion also gets some hits, being called out for his blindness towards trusting his family even when he claims he does not. The best call out of the episode is sent towards Jaime Lannister. Jaime talks with Tyrion about their sister, Cersei, and his loyalty to but Tyrion corrects him.  Jaime always knew who Cersei was, but he loved her anyway. And love can blind. These conflicts between characters are strong reminders that not all is perfection. Sure, the good guys have come together for a common goal, however, there are still flaws left uncorrected and grudges left unfulfilled. These problems are put away for one last night ahead of the end of the world, but some of these problems are sure to persist for those who happen to survive.

The King Killer in the North

Jaime’s return to Winterfell was the cliffhanger of last week, and the political conflicts of Northern loyalty was a major theme of the premiere.  Jaime’s arrival was a big moment, however I felt it was rather easy and clean. A few lines from Brienne and Sansa, and Jaime is among the ranks with no real impact on the social standing or politics.  I find it hard to believe that the Northerners would be so open-armed to the Lannister brothers serving leadership positions. There is a moment where a Northerner spits towards them, however I was expecting a much larger impact by Jaime’s arrival.  This episode puts politics aside and focuses in on the characters, which is a welcome shift ahead of a final battle. An addressing of the shaky Northern alliances could have added even more to the fear of inevitable death that carries the episode. 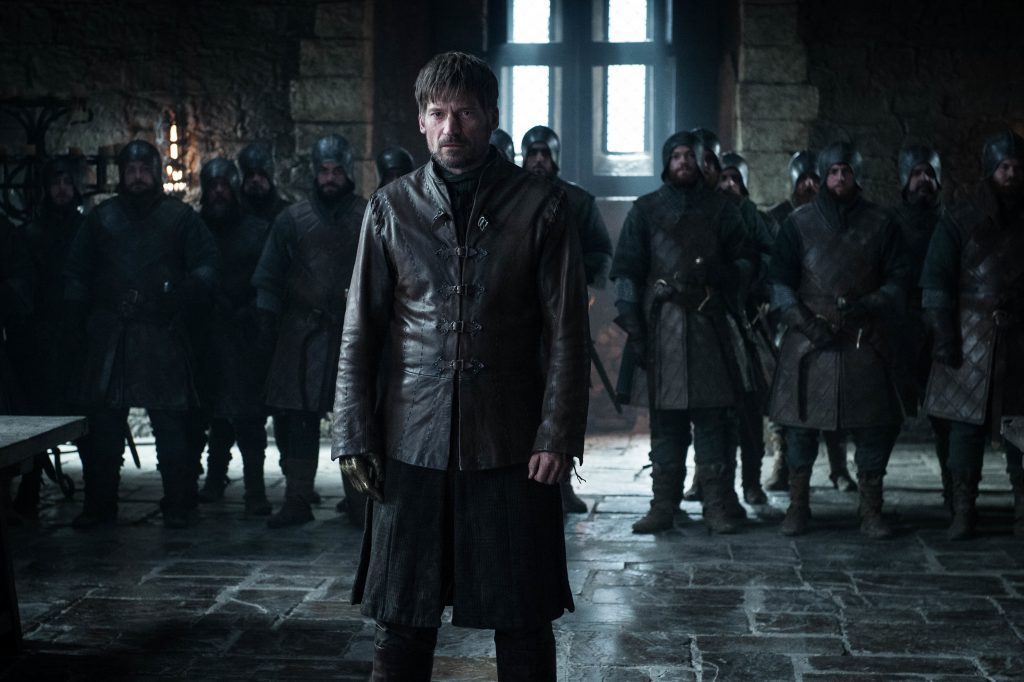 One of the most annoying and cheap writer crutches is one that recurs very often in this show from the beginning.  I like to call it the “sorry to interrupt” moment. Characters are about to say something important or do something significant, but the conversation is cut short by the overly-convenient arrival of another character or other interruptions. The first moment is when Sansa and Dany are discussing the war.  They get along well enough, however they come to conflict over what will become of the North after the war. 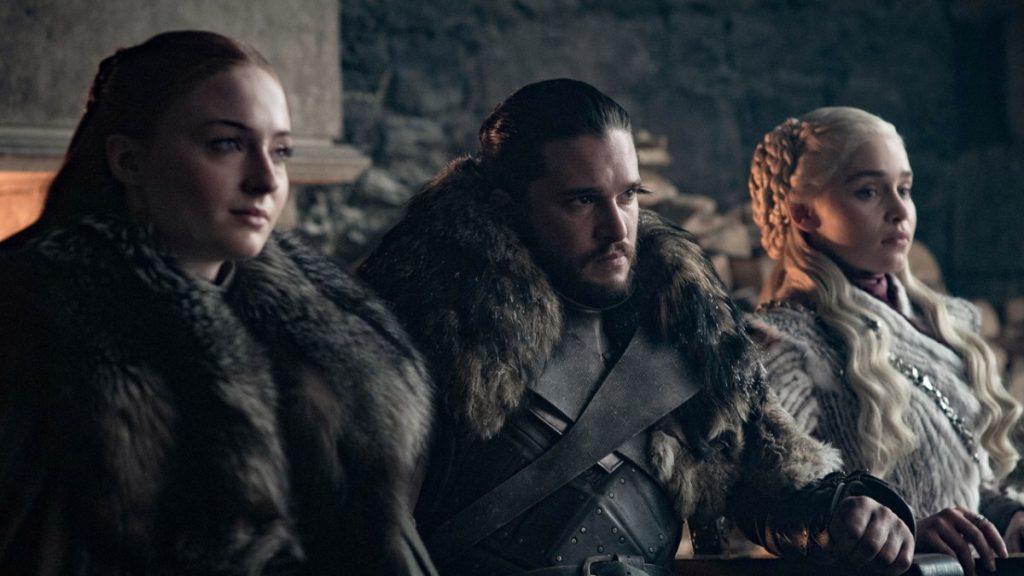 Before Dany can say a word, they are interrupted and the conversation is never visited again. This happens in almost the exact same way towards the end of the episode when Jon and Dany are interrupted in the middle of Jon’s R+L=J reveal to Dany.  This is a central mystery from the first episodes of the series, and the moment being cut short without conclusion feels like a cheap way to avoid having to answer uncomfortable questions in the script. This happens more than once in this episode, and with so few episodes it can be very frustrating to see these vital conversations cut short in such a lazy way.

What Happens Next on Game of Thrones

This episode of Game of Thrones was a fantastic return to form and has cemented its spot as one of my favorite episodes in years.  Characters are brought together in natural ways and the foreboding sense of the end hangs over every moment, reminding us that several of these conversations are likely the last time many of these characters will interact.  Going in to the next episode, with nearly 90 minutes of runtime, we are sure to get a massive battle to the scale we have never seen before. This season is set to feature the longest continuous battle sequence ever put to film, and next episode is likely the top candidate for this battle.  We are sure to lose a surreal level of supporting characters next week, cutting down the cast of leads by possibly half or more. 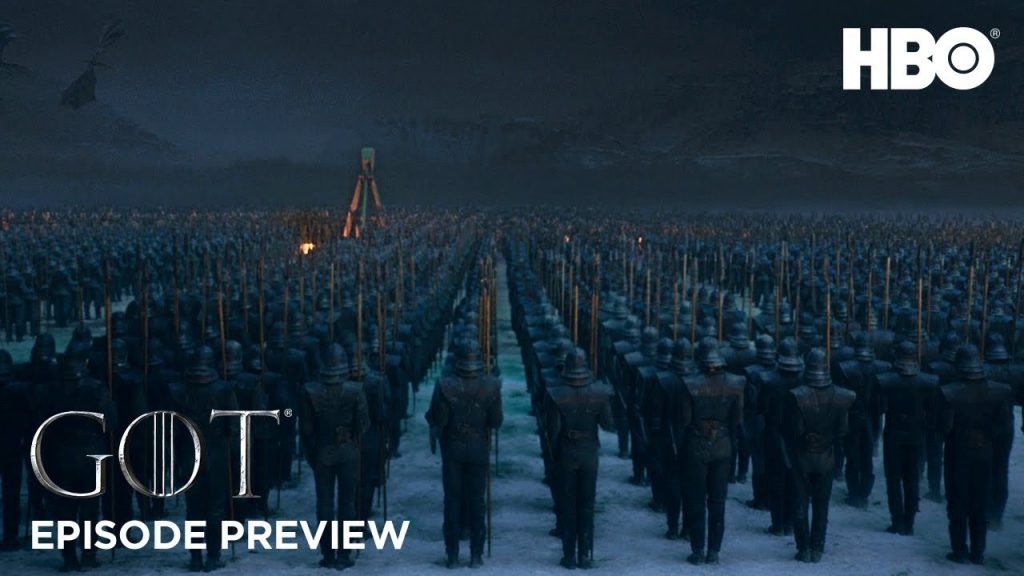 My top predictions for deaths revolve around who is where on the battlefield.  I would expect many of the ground characters to eat snow, especially characters who were given bigger moments this week.  I’m placing my gold dragons on Jorah, Davos, Greyworm and Tormund as sure deaths. This will give an emotional loss for every major character and significantly shorten the list of leads.  I’m pretty confident Tormund will lay his life down in defense of Brienne, and Greyworm’s talk of future plans with Missandei is sure to mark him for death. I also think we will see the deaths of Beric Dondarrion and Bran Stark.  Beric’s story revolves around the Long Night and the Lord of Light, and I do not know what I would see the character doing after this battle against the dead.

Prior to the premiere, I predicted that Bran will upload himself to the Weirwood Net in Winterfell’s Godswood, leaving his empty shell of a body behind as the wights close in.  Him requesting to hold out in the Godswood this episode hardens my predictions. I also believe Bran will be used to feed us one last flashback to open the episode. Possibly to another White Walker flashback to establish more of their motive. We may also get a flashback to the Winterfell of old, possibly with Ned Stark himself returning, to see Bran off as a character.  Surely the good will conquer the evil in this episode, but it will not be without cost. A fractured, broken rebellion will be left to take on Cersei in the names of those they’ve lost. 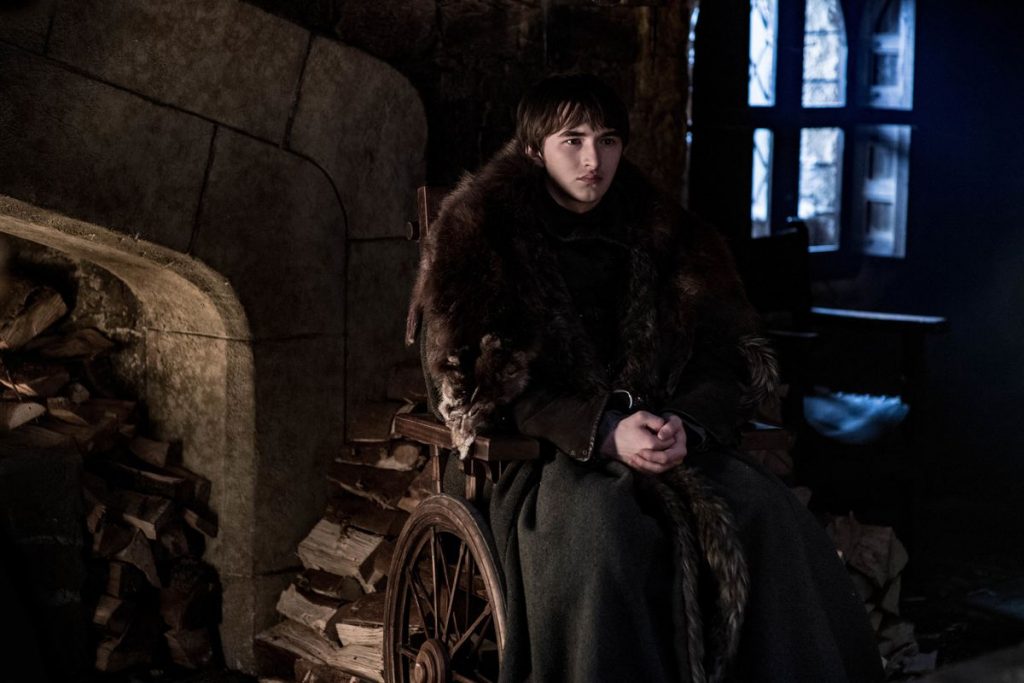 Thanks for reading my review of the latest Game of Thrones episode.  Next week is the big week, and it will be a long wait. In the meantime, check out The Cinescape for plenty of articles, news and reviews.  You can also visit www.tristanmayermedia.com for more of my own reviews.  If Game of Thrones isn’t hype enough for you, Avengers: Endgame is just days away, and you can find reviews on both sites coming soon!

See you next week for the War of Ice and Fire as the song nears its final chorus.