Season 7 of HBO’s Game of Thrones has come and gone. The abbreviated season was certainly dark and full of terrors and left fans clamoring for more. Though season 8 may not debut until 2019, there is certainly a lot to talk about as we hurry up and wait. From Jon to Dany to Cersei, let’s review the season that was. 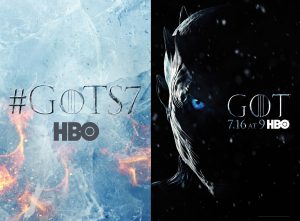 As you may or may not know, I am a massive fan of the A Song of Ice and Fire series by George R.R. Martin. I won’t get into my love of the book series or my distaste for the TV series here, but feel free to read my article on the matter. With that being said, I eventually did catch up on seasons 5 and 6 before season 7 premiered, having an open mind. I told myself that I would do my best to take the TV show for what it was and to not associate it with the books, which certainly was difficult at times.

Though there were a number of great scenes scattered throughout this season, there were plenty of moments that left me scratching my head. The shortened season tried to be way too ambitious, causing timeline errors that took me out of many episodes. I understand that show runners D.B. Weiss & David Benioff are under strict deadlines to get to the meat of things, but this practice has been a detriment to the overall storyline. How is it that ravens sent from The North can magically make it to far away places like King’s Landing and Dragonstone in such a short amount of time? It’s little things like this that makes me dislike the show. 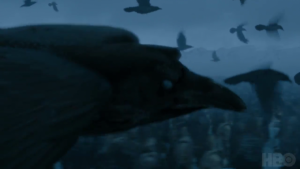 The world that George has created is so incredibly huge that a show like this could run for a very long time, but it seems like despite its great ratings, budgetary reasons are holding it back. The original novel was published in 1996 and the series is still being written, which shows you just how much material there is within its pages. So why, with the sheer amount of material, does the show have to cram plots, characters, and storylines together in such a breakneck way?

I don’t want to constantly bash the series in this review, so lets get into some things that I actually liked. I really have enjoyed watching Samwell’s evolution from a cowardly cast-off to what he is becoming. Sam’s steadfast manner has been paramount in uncovering the secrets of the measters, leading to the discovery of how to fight the White Walkers and the secret history of Westeros. 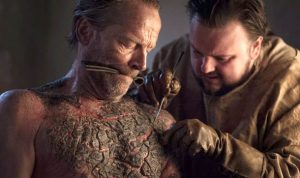 One of my favorite characters has always been Tyrion, and I can’t describe how much of a perfect fit I believe Peter Dinklage is to play him. I find myself hanging on every word he speaks, as his delivery and gravitas is profound. Tyrion is doing his best to keep Daenerys in check and he basically offers up his own life to Cersei in order to bring about a truce between the two queens. His belief in Dany is so strong that he will do whatever needs to be done. Knowing how Tyrion starts out as a self-involved, drunken whoremonger makes his arc even more enjoyable to watch. 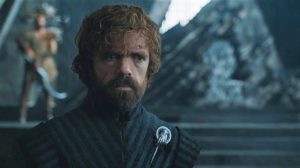 The tale of Jon Snow has certainly grown. The “bastard son of Ned Stark” has gone from a brother of the Night’s Watch to Lord Commander to King of the North, even coming back from the icy grip of death. Jon is a true hero that sees the endgame, which aids in his decision-making. After Jon and Dany meet, he is able to earn her trust and enlist her help in fighting the undead army north of The Wall. After the season finale, which revealed Jon’s true parentage, it will be very interesting to see how his new identity is revealed to him and how it will come into play. According to the show, R + L DOES = J. 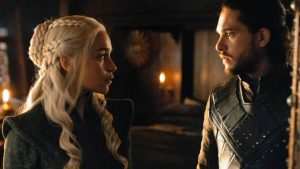 Besides the characters that I enjoyed watching, there were also some great set pieces and revelations. Watching the dragons in battle both against the Lannister and undead armies was quite a spectacle. It’s easy to see where a majority of the show’s budget ends up after seeing how amazing they look on-screen. I was very surprised when Viserion was killed by the Night King and turned into an undead beast. That moment was certainly one of the coolest moments of the season. To piggyback off of that, seeing him take down The Wall with his ice breath was something that fans may not have seen coming. 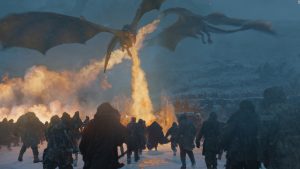 Though visually fun, the battle between Jon’s small band of men against the wights felt very hollow. Sure, Thoros died along with a bunch of unknown warriors, but the stakes were lowered when characters faced certain death only to miraculously saved. By all accounts, Tormund and Jon should have died. These acts go against the grain of what the books and show to date have been doing in terms of killing off characters.

For the most part, I feel like Bran’s arc was a waste. After his initial return to Winterfell, he did very little to enlighten those around him regarding the knowledge he possesses. Being basically omnipotent, he should have been telling everyone about everything he knows, which could have prevented so much, but he doesn’t. I hope Bran has more to do next season after Westeros is invaded. 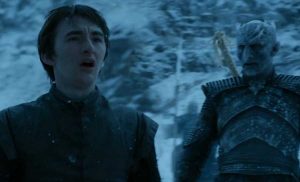 Staying in The North, I very much disliked Arya’s and Sansa’s storyline this season. The payoff of Littlefinger’s death after episodes of Stark squabbling was almost unsatisfying for me. I don’t really see the point in everything Littlefinger was trying to accomplish in terms of getting between the Stark sisters. What would his plan have been had Arya not returned? Petyr Baelish had been a master of deception and chaos leading up to this season, causing the rift between the Starks & Lannisters while growing in power and influence. The way he went out made everything he accomplished seem pointless for me. Going back to season 6, his whole arc really started to go downhill for me and I didn’t care for him in this season either. 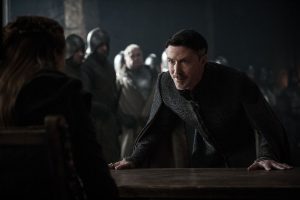 One of my biggest gripes of the season was the wasted characters and plots. Besides the very end of the finale, Euron Greyjoy was a waste of a character. His  capture of Yara does nothing to move the story forward, as Theon has no bearing on anything

important going on currently. The deaths of Ellaria and the Sand Snakes angered me, as it totally discounted anything to do with Dorne. The Dornish plot in the books is one of the most intriguing cogs in the machine and this single act threw it all out the window, much like the destruction of House Tyrell.

It was no surprise that Cersei had lied to Dany after forming a truce in order to do battle with the coming undead army. In typical Cersei fashion, she had ulterior motives, only thinking of herself instead of the good of the realm and ultimately the entire world. It will be very fulfilling to see her plan backfire next season when King’s Landing is besieged by wights. 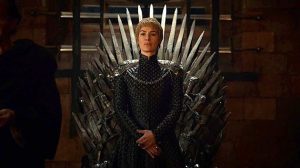 The final images of the Night King taking down The Wall while mounted on an ice dragon will be long-lasting and was pretty cool to see. The impending invasion is already being felt as we saw snow begin to fall in King’s Landing. It will certainly take everything these Houses have to stop the White Walkers, but will they eventually be able to work together? 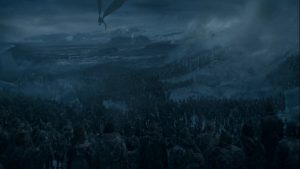 There are plenty of other plot points, characters and things that I simply can’t remember off the top of my head. Again, I’m doing my best to try to keep the show and book series separate, as they are vastly different in terms of the current happenings. So many things currently taking place in the books make the events of the show illogical, but I digress.

What were your favorite moments of season 7? What were some things you wanted to see but didn’t get to? And finally, what are your predictions for season 8? Let’s hope George finishes The Winds of Winter before it arrives. Valar Morghulus.

One thought on “Game of Thrones Season 7 Review”